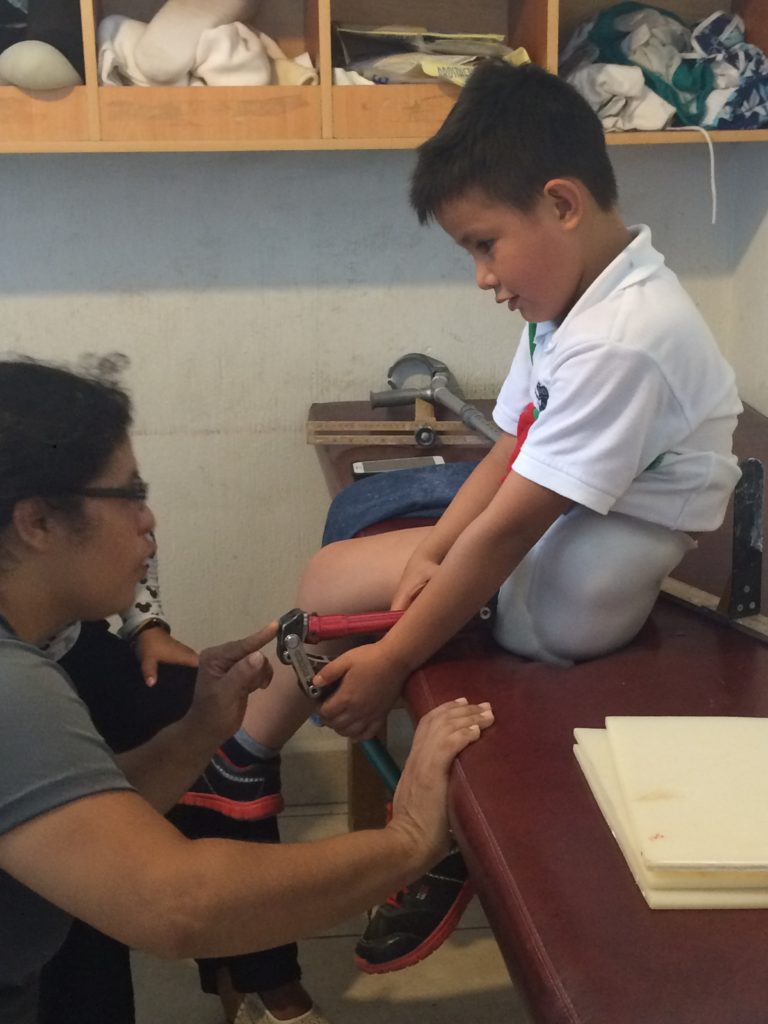 The TripAdvisor Charitable Foundation partners with GlobalGiving in awarding grants to organizations that  relieve the suffering of people around the world.

Fabiola consults with Breyner about the fit of his prosthesis

Fabiola, a prosthetic technician for Range of Motion Project (ROMP), welcomes Breyner with a warm smile as he walks through the doors. A year prior, seven-year-old Breyner’s leg had been removed during his battle with cancer. Breyner and his mother Gabriela had made the two and a half hour trip to ROMP three months earlier after hearing that the organization provides free prostheses to children in need. For three months, Breyner used the prosthetic leg provided by ROMP to walk, run and jump. But as Breyner continued to grow, his prosthesis became uncomfortable, and he was forced to begin using crutches again to help with his mobility.

Fabiola measures Breyner and finds he has grown two centimeters in the last three months. His prosthesis will need to be lengthened slightly to enable him to walk comfortably again. Carlos, a prosthetic assistant, adjusts Breyner’s prosthesis in the ROMP workshop, changing out the rod that serves as Breyner’s lower leg for a slightly longer one. With his newly adjusted prosthesis, Breyner strolls confidently through the parallel bars and proudly shows off his mobility for the ROMP team.

TripAdvisor employee engagement: the beginning of a partnership

Though Breyner and his mother had to travel long distances to receive help from ROMP, the time investment came with a significant reward—realization of Breyner’s potential for mobility.

Patrick Mathay, former TripAdvisor Team Lead for Owner Support, also invested heavily in ROMP, though in a different way. In 2009, Patrick began volunteering with ROMP, conducting effectiveness surveys and providing fundraising support. During that time, he met patients like Breyner, whose lives have been altered by ROMP’s services. Seeing ROMP’s impact for himself inspired Patrick to take action through the TripAdvisor Charitable Foundation, which accepts grant proposals from nonprofit organizations that have been engaged with a TripAdvisor employee on a volunteer basis for at least six months. Patrick supported the ROMP team as they applied for the funding that would allow their organization to maximize its potential and reach more patients like Breyner. His initial support resulted in a significant reward for ROMP— multiple grant awards from the TripAdvisor Charitable Foundation and GlobalGiving over six years.

The grants that the TripAdvisor Charitable Foundation has awarded in partnership with GlobalGiving have helped ROMP become a prosthetic industry leader in underserved communities. The ROMP clinic in Zacapa, Guatemala started as a single room where prosthetic technicians saw patients and built prosthetic molds. Today, ROMP is a full-service rehabilitation center that’s served more than 3,000 patients. It now boasts two patient rooms, a waiting area, parallel bars, a workshop, and a 3D printing lab.

Investment in ROMP has strengthened its operational foundation, helping it to transform from a volunteer-based organization to one with a strong team of professionals. ROMP is lead from their office in Quito, Ecuador by Patrick Mathay, a familiar face to ROMP who now serves as Executive Director, and Diana Antony, who serves as Operations Officer. Employee engagement with TripAdvisor is still ongoing following Patrick’s departure, and ROMP has continued to benefit from the skills of TripAdvisor employees, who have helped in areas such as social media and branding strategy. TripAdvisor’s volunteer engagement and support, recognized through a GlobalGiving grant, is allowing ROMP to make the adjustments needed to realize its potential.